“Never again,” I said to myself over and over. I must have been out of my mind when I chose Majestic Magnolia cross stitch, a gorgeous design I simply couldn’t resist. It didn’t matter to me that I was still a beginner and I had never stitched on linen. I thought I could tackle any project.

Today, it’s my crowning achievement, one that would take five long years and several trips around the globe to complete.

The chart is barely legible anymore; faded, with coffee stains and who-knows-what-else. I saved it anyway.

The magnolia with its creamy white blooms and dark lustrous leaves is a statement of cross stitch beauty, even prettier that I originally imagined it.

But, what a love-hate relationship we’ve had.

“Never again,” I repeated, too many times to count. This project wreaked havoc with my emotions, from tears of frustration and disappointment, to an incredible sense of pride and joy in the finished piece.

Where it all began

I was 20 the first time I met anyone who did cross stitch. She was a passenger on one of my flights. Fresh out of college, I had just accepted a job as a flight attendant with a major airline. I don’t remember where we were going that day.

I only remember walking up and down the aisle of the plane marveling over this woman’s devotion to a craft that had always seemed so boring to me. Her work was stunning. I asked questions. I was hooked.

Up until that day, sewing had always been my passion. Self-taught all the way, I made my own clothes in high school, decorated my dorm room in college, sewed costumes for nieces and nephews, and made countless other projects over the years.

But my glamorous new career took a toll on my sewing. I was fulfilling a childhood dream to be a flight attendant, jetting off to faraway places. Try as I might, my machine was too heavy to carry on the plane. My sewing was put on hold.

As a flight attendant I had a lot of down time; sitting in hotel rooms in foreign cities, fighting to stay awake in the middle of the night while passengers slept, sitting for hours between flights.

I yearned for something to occupy my hands and my mind the way sewing did. I needed to create.

Then I met my friend, the passenger who inspired me to try cross stitch. I was simply amazed at what a needle, a simple stitch and colored threads could do in the hands of an artist.

This resulted in me jumping in with both feet, buying cross stitch books and magazines, starter kits, threads, hoops, and anything else I could find. I was determined to learn as much as I could about this wonderful craft.

After my tough cross stitch beginning with Majestic Magnolia, I continued with simpler cross stitch projects, and gradually expanded my skills. Before long I became a fairly decent stitcher.

I was thrilled. Cross stitch was the perfect pastime for flying; relaxing, creative, and fun. Best of all, it was portable. I could do it anywhere.

And so I did. From Anchorage to Atlanta, and Bali to Bermuda, I stitched and stitched (and ripped out just as often) every chance I could.

Mistakes and mishaps were an everyday occurrence. There were lots of pricked fingers. I constantly lost threads and had to replace them. With the pressure caused by airline schedules, the chart inevitably found its way into the trash several times, and I left the whole project in more hotel rooms and airplanes around the world than I care to remember.

But, you know, somehow it always found its way back to me – fate?

It was a challenge but the memories…

My Majestic Magnolia cross stitch was a challenging project for a beginner but I was lured by its beauty. For the most part I had to work in daylight only in order to distinguish between the different shades of cream, ecru, and white flowers which were stitched on cream-colored linen.

The leaves too were done in various shades of green. I was humbled and even slightly embarrassed when people would stop to admire my work, but it was always very encouraging.

This particular project will always bring back wonderful memories of my incredible career in the airline industry. What a glorious time in my life.

I’ve had the opportunity to work on my cross stitch in some amazing places; at a park overlooking the Golden Gate Bridge, at a sidewalk cafe in Paris, sipping Italian wine outside the Vatican, and riding a ferry to the Statue of Liberty.

Would I do it again?

I said I’d never do it again. Famous last words. But I actually have done it again, many times.  In fact about a decade ago, for Christmas I created bookmarks with a magnolia theme for my nieces and nephews; they were well used. I’m passionate about cross stitch and buy charts and kits everywhere I go.

The truth is, when I look at my final masterpiece I feel astounded. How on earth did I create something so beautiful out of a blank canvas, thread and a pattern. Few things give me greater joy!

If you enjoyed this tale, or have an even better one yourself, I’d love to hear from you. I answer all emails received, so if you’ve any stories, comments, or questions – please feel free to send them to me. 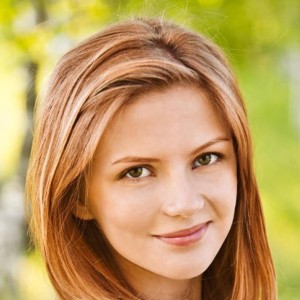 Hi, I'm Scarlet and have been an avid cross stitcher all my life. I'm a busy Mom with two young children, and am a contributor and editor on Patterns Patch.

We are supported by our audience. When you purchase through links on our site, we might earn an affiliate commission.
Learn More